Learn More.  How does the technology work?

Standard Approaches for Diagnosis of Infectious Disease and Their Problems

To address these issues, NanoPin uses an antibody enrichment approach to capture species-specific biomarker peptides released upon trypsin digestion of the serum of infected individuals and employs mass spectrometry to identify these peptides with high sensitivity and accuracy.
​
This approach has several advantages, since serum digestion cleaves all factors that may interact with a biomarker target to remove their masking effect and increase the amount of target protein available for analysis, while pathogen-derived peptides biomarker peptides produced during this digestion can be used to uniquely distinguish highly conserved proteins expressed by closely related pathogens. Finally, antibody-mediated enrichment of a target peptides prior to their analysis by tandem mass spectrometry serves to increase both the sensitivity and specificity of their detection. 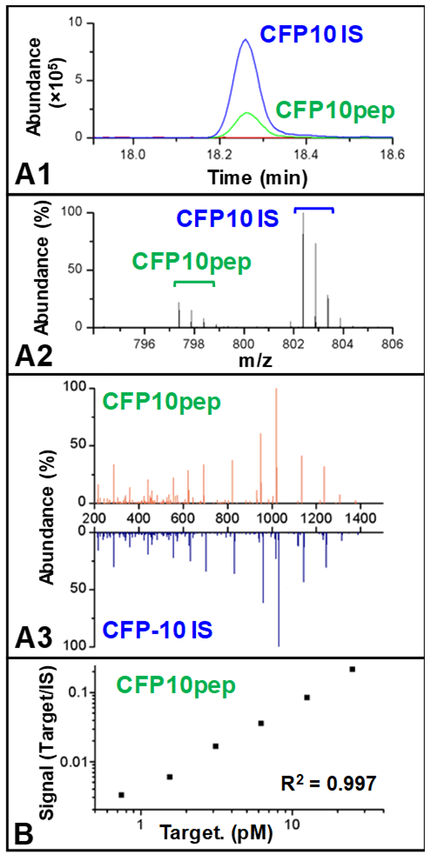 ​NanoPin’s TB Assay
TB was the leading cause of infectious disease mortality prior to the SARS-CoV-2 pandemic, which is expected disruption of global TB screening and treatment efforts caused by SARS-CoV-2 is expected to markedly worsen the number of new TB cases and deaths over the next five years.
Mycobacterium tuberculosis primarily causes respiratory infections that can progress to TB disease that remains contained within the lungs (pulmonary TB) or spread to other sites (extrapulmonary TB). Many individuals with pulmonary TB are not diagnosed by respiratory specimens (>40%) due to the low abundance of Mtb bacilli in these specimens (paucibacillary TB), while >15% of all TB disease is extrapulmonary TB, which must be diagnosed using invasive tissue biopsy by current methods. There is thus an urgent need for new assays that use non-respiratory samples such as serum to improve TB diagnosis.
Mycobacterium tuberculosis also belongs to a large family of mycobacteria (>180 species), and several of these nontuberculous mycobacteria (NTM) cause infections that resemble TB but require different drug interventions. These NTM species are often misdiagnosed as suspected TB cases and chronic, multi-drug resistant TB cases in some settings. Species-specific identification necessary to avoid ineffective treatment and drug resistance normally requires pathogen-rich samples.
However, peptides derived from the Mtb virulence factor CFP-10 permit species-specific identification, distinguish active TB disease from latent TB infections, and reflect viable pathogen load,1 unlike current methods that lack one or more of these abilities, including assays that detect Mtb-derived biomarker proteins.2
In NanoPin’s TB assay, serum samples from patients with suspected TB are trypsin digested and then spiked with a constant amount of a synthetic, isotope-labeled internal standard (IS) peptide of the same sequence as the CFP-10 target peptide (CPF10pep). These samples are then incubated with magnetic beads conjugated with a high-affinity monoclonal antibody that can capture and enrich both the CFP10pep and IS peptides.
Captured peptides eluted from the magnetic beads are then analyzed by high-resolution liquid chromatography coupled tandem mass spectrometry (LC-MS/MS) to identify and quantify the amount of Mtb-derived CFP-10 present in each patient’s serum sample.
Since both CFP10pep and IS share the same sequence, both eluate as the same point in the LC gradient (Fig. A1), so that the high-intensity MS signal produced by the relatively high concentration spiked-in IS peptide standard can confirm the elution time of the CFP10pep, which may be present at very low concentration.
Mycobacterium tuberculosis-derived CFP10pep MS signal can be readily distinguished that of the IS peptide due to the greater mass of the latter peptide (Fig. A2), while CFP10pep-specific fragment ions detected in the MS/MS spectrum can be confirmed by comparison to the mass shifted peaks of the IS peptide (Fig. A3).
Finally, the amount of CFP-10 peptide present in a patients can be accurately quantified by comparing the ratio of the MS signal of CFP10pep and IS peptide to that of a standard curve generated when healthy human serum containing serial dilutions of recombinant CFP-10 are trypsin-digested, spiked with a constant amount of IS peptide, and analyzed by the same assay procedure (Fig. B). Standard curves generated in this manner reveal good linearity (R2 values >0.99) and allow the quantification of sub-picomolar concentration of CFP-10 to permit ultrasensitive detection of this TB biomarker in serum.